Why #BlackLivesMatter to this White Lady 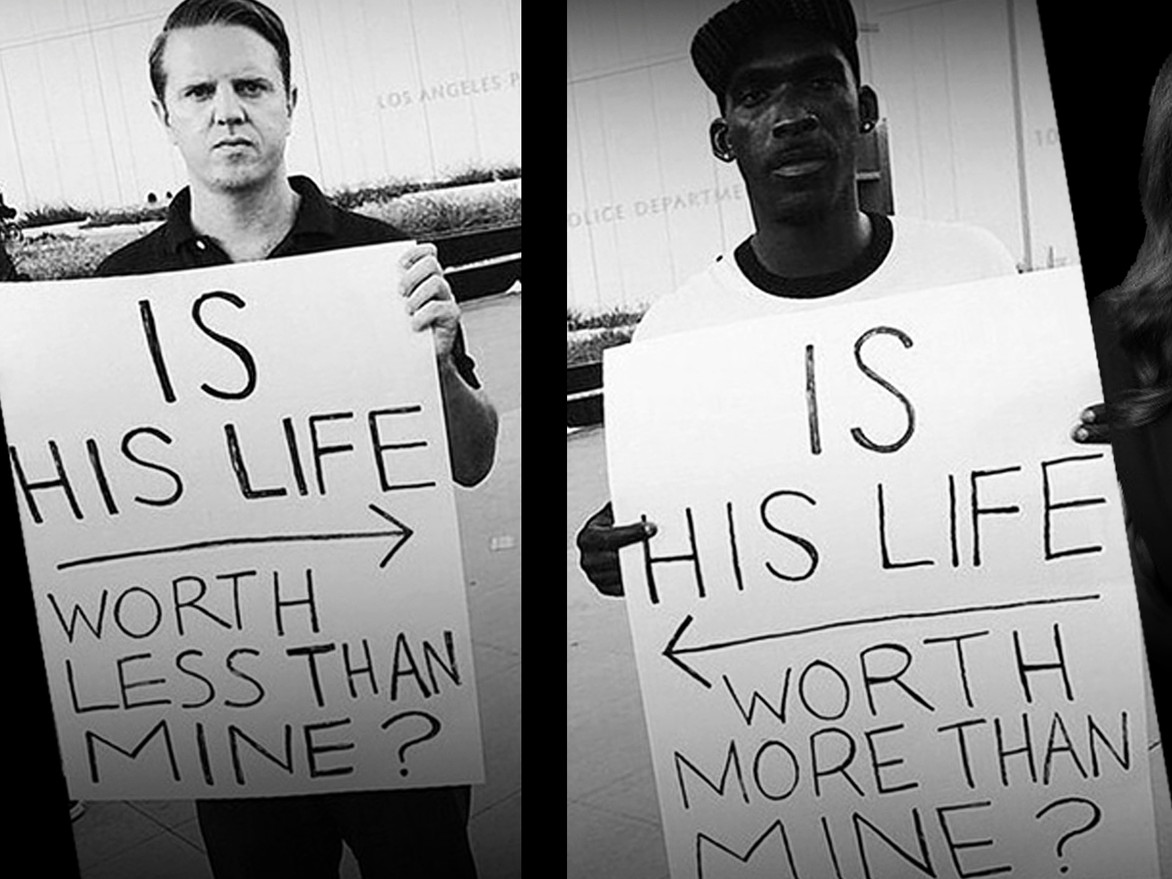 Who am I? I am a white (that is up for some debate since we found out my great grandmother on my mothers fathers side was Native American thanks to genetic testing, but we will just go with the identity I have known up till last year) woman, age 39, born in America, who actually cares about Black people. Yes I do.

Why is that you ask? Is it because of my super liberal, California upbringing? Well yes and no. Yes my mother is a flaming liberal. Like so flaming she is hot enough to be her own welding torch.  My father, not so much. He was raised in central California in sleepy Lodi. He used every racist  derogatory word. And he meant them. Sure he would make a “joke” and laugh it off like he was being funny. And he was funny a LOT. Just NEVER about these things. Once my sister and I went to visit him in Southern California when I was 12 after he and my mother had divorced. On our ride from the Airport to his apartment he was in a particularly racist mood and was doing a running commentary on every non-white person that he could see from the car. Finally I couldn’t take it. I told him in no uncertain terms that if his disgusting racist rant didn’t end he could take me and my sister directly back to the Airport and we would catch the next flight back home. He looked at me through the rear view mirror, laughing and then our eyes met. He saw that I was dead serious. He stopped.

Why did I feel so furiously about that? It could come from a lot of places really. I am a bit of an odd duck. I have always felt out of place in my body. I have felt like I belonged to another time and space. But I managed to always make friends and make people laugh. I moved a lot. I was always the new kid. I was always having to reinvent myself every few years. Just before my parents divorced in 1984 we were living in San Francisco. We lived in the Marina on Chestnut street. Back then the City was divided very fiercely into sections of ethnicity. The Marina, was mostly Asian, while the Mission district was Latino, the Fillmore was where the Black neighborhood was. So in the morning in school, my sister and I were in the minority. We were white, 90% of the classmates I had were Asian, mostly Chinese with a few kids from other backgrounds. Then after school the bus would take us to the Buchanan Street YMCA, which was in the Fillmore District. Right on the border, looking across the street you saw Japan Town. So in the afternoon we were the minority as well. Everyone was Black at the YMCA. Except me, my sister and one counselor Nick.

So all of my friends were either Chinese or Black. I thought, as an 8 year old growing up in San Francisco, this was totally normal. So normal in fact that I decided that I was in fact black. My friends from the YMCA seemed to agree. Ryante, Dante, the twin counselors Patricia and Phillip all my friends there. It was a consensus. So much so that I asked my mom to let me get a Jerry Curl in my hair. She exhaustively told me that my hair wouldn’t do that because I wasn’t Black. I was still unconvinced. I was going to do everything in my power to become what I knew I was on the inside. A fierce Black woman. I started studying Black history. I became ENRAGED with what I found out. Back in the days before google and the internet kids you had to scour bookshelves in the library, and go through microfiche, and watch old news reels. And that is what I did. On my own I learned about the civil rights movement that had happened a mere decade before my birth. I saw that things weren’t all that different. Black people weren’t free and were still struggling. I was determined to make it right. When Martin Luther King Jr.’s Birthday came around the YMCA had a speech contest. We were all to write a speech and deliver it and the winner was going to speak at an awards ceremony.

I worked for a WEEK (which to an 8 year old is an ETERNITY) on my speech. I wrote it, rewrote it and worried about it nightly. We were all going into the office one by one to give our speeches to the leaders of the Y. Finally it was my turn. When I looked up from my paper, tears were in the eyes of everyone in the room. I was shaking. I knew I was going to get to speak. I remember the night very well, even 31 years later. Lots of awards had been given out. I was the keynote speaker essentially. Everyone’s parents were there. I hadn’t met them before. My name was announced. As I walked to the stage, muttering from the crowd started. Fingers pointed. Scowling faces. I heard someone say, “Who does this white girl think she is talking about Dr. King?” I got very nervous. I thought maybe I was the wrong choice. In that moment I knew I was not black. That I would never be black.

I looked out into the crowd of angry faces. I saw my mother, beaming from ear to ear and my counselor Phillip smiling a huge smile, urging me to start my speech. Phillip had been dealing with all the other kids who had complained that a white girl was talking instead of them. He assured them it had nothing to do with me being white. It was that I had written a better speech. He warned me that at first people would be upset that I had been chosen to speak but not to worry; once they heard my words they would understand.

As I walked onto the stage, looking out at the crowd, I was pretty sure that Phillip had lied to me. People were NOT happy. I took a deep breath and I started talking, I tried my best to look out into the crowd. I decided I was just going to talk to the whole room. I went for it. I gave this speech every ounce of passion that I had. At the end I had tears as did the entire audience. People were clapping and crying and everyone hugged me after. That night I crossed the color barrier. I did get it. I think in that moment for the adults present who had lived through the civil rights movement and those who knew life before that was even a dream, saw a glimpse of the future in me. A future that existed without boundaries or limitations. One where equality would ring true with every citizen no matter how young or old they are. A future where the color of our skin was not a label that determined our destiny.

Which brings me to today. My thoughts about race haven’t changed since that night, but clearly neither that dream I had 31 years ago or the one that Martin Luther King Jr. had has come true. I wish that it had. It would be so much easier. Wouldn’t it? I mean if the color, the pigment, of our skin meant NOTHING to each other? Wouldn’t that be a wonderful place? Yes, I think it would. Instead we live in the powder keg of tension that we like to call the “United” States of America. Honestly I don’t know what we are UNITED about anymore. Anyone? Is there anything that we as Americans can actually agree on?

I have two sons. They are also white. But there is a glimmer of hope for their generations I think. I see their classes at school. Filled with kids from all different backgrounds. They look at each other like humans. That’s it. The end. Nothing else. They play with each other regardless of what they look like or what they are wearing. It makes my heart smile. I hope that never changes for them. Looking at other people as PEOPLE who are equal to them in all ways. I am teaching my kids about white privilege and that it is, in no uncertain terms, fucking bullshit. It means nothing and they will gain nothing from life utilizing it. They are to be part of the solution not part of the epically horrific problem. I think they get it. They seem to.

I want to march in the streets as much as my 8 year old self did. I see what is happening and I feel that same rage I did as an 8 year old learning about Selma. But is my voice helpful or hurtful? That is the question I face today. When I was 8 I knew everything and I knew what I thought mattered. Nothing I could think of was impossible. Now 31 years later, I wonder what happened to that powerhouse of a girl. She would have never questioned herself. She would have gotten up on a chair and shouted BLACK LIVES MATTER over and over until a crowd had formed around her and she was leading them down the block chanting. Black lives matter because Black people are PEOPLE. They are humans. They are Americans.